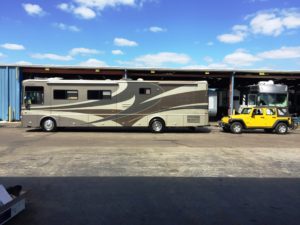 So as our first year is coming to a close I would like to say we didn’t have any problems. That would have been great but not realistic. There is a learning curve for first time RV’rs and a little thing called Murphy’s Law. As our rig is a 2006, maintenance issues were anticipated. You just have to be in the mindset that things will go wrong and what is the best way to deal with them when they do.

The following is a list of, let’s call them challenges that we had to address and overcome.

As you can see full time traveling is not without its problems. When I think of maintenance costs for a vehicle and a house, I still think we are much better off and don’t regret it in the least. With the purchase of extended warranties on both the coach and the Jeep was definitely a smart choice!