This is our 7th coast to coast trip in the past 6 years. To think you will have no problems while traveling that much is a serious case of denial. Nonetheless we were very lucky with just a few minor problems to contend with. That was until last year on our way home to northern New York from Nevada. We decided to travel through the central part of the country to see places that were on our bucket list. From Bryce and Zion parks in Utah to Memphis, Bowling Green, Atlanta and many others along the east coast. Life was good, until…

We left Memphis, Tennessee on our way to Bowling Green, Kentucky. The trip was slow going traveling in a 50 mile work zone in bumper to bumper traffic. We decided to pull off the road for lunch. I pulled to the end of the exit ramp and prepared to turn left to go over the bridge. As I pulled away my wife heard people yelling to stop. She yelled for me to stop that our Jeep had become totally disconnected from the motorhome. (see pics) I applied the parking brake and flashers then got out to assess the damage.

As traffic was backing up behind us a nice gentleman from the Tennessee DOT stopped to help us out. We noticed the receiver was broke away from the motorhome. The only thing connecting the motorhome to the Jeep were the two safety cables. Our bikes were mounted on the top of the receiver on its own bike rack which was now under the Jeep mangled including the bikes. The DOT employee offered to take the mangled mess away for us which we were very thankful.

We determined the failure occurred when the HiTow dual hitch receiver adapter, so we could attached our bike rack to, had a failed welded joint that broke apart. (see pic with arrow) With the bikes now gone I hooked the Jeep directly to the motorhomes receiver and we were on our way. If you have one of these HiTow dual hitch receivers I recommend that you inspect it regularly for any cracks in the welds. We will never use one of these again!

What could have happened is a scary thing to think about. If this had happened while traveling on the highway through the work zone, it could have been catastrophic. We were very lucky! 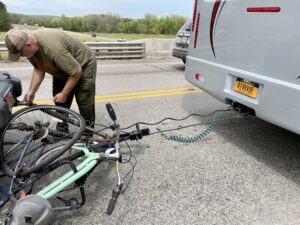 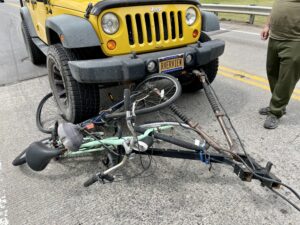 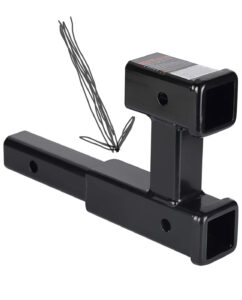 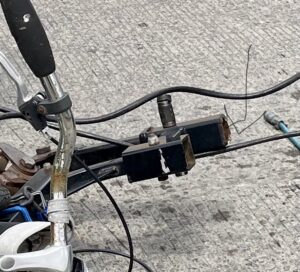 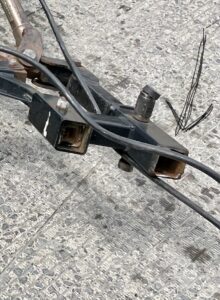 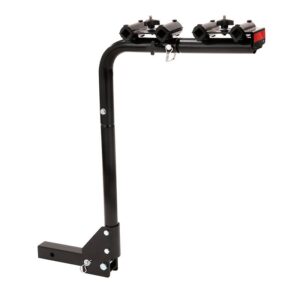 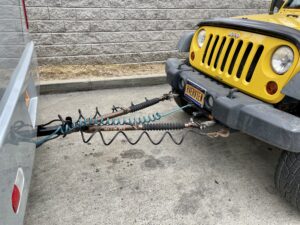 Back on our way without the bikes